I’m uncomfortable with death. A staunch atheist who grew up Christian, I used to believe heaven or hell awaited me on the other side. It took years of anxiety attacks and therapy to come to terms with mortality, with there being nothing afterward, and I find peace by not thinking about it. 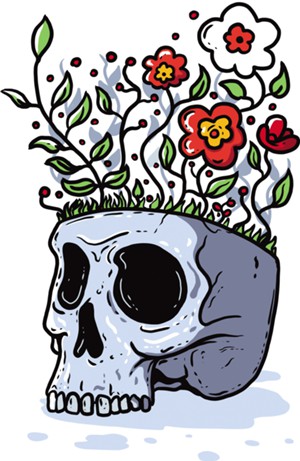 But tonight, the whole point is to think about it. The mortician warns us that at any moment, someone’s dead body could interrupt the show. Even mine.

Tim Lilyquist coolly gives the omen to the 25 or so seated at the Chapel of Angels Mortuary in Grass Valley. His death-positivity group Posy-Filled Pockets is just beginning its October presentation. The projector screen reads: “Death. Everyone’s doing it.”

It’s not like we’ll see a literal dead body (though if we hear commotion in the back, Lilyquist says it could be because of that). A fresh corpse would remind us that, even though we’re all here to laugh, learn and contemplate our unexistence, death strikes at any time. Tonight’s topic of discussion: the afterlife.

Lilyquist and founder Rachel James open the night by defining death positivity, which boils down to allowing death to be a part of everyday conversation, even if it’s scary.

“Death is something our culture is extremely weird about,” James told SN&R. “We don’t talk about it, we don’t plan for it, and anyone interested in it is considered morbid or weird when it is the only personal experience besides birth really that we all have.”

Four speakers gave talks that were funny, morbid and informative. One made a case that seances, mummies and telephones were ways humans tried to call up the dead. Another theorized that water is a parasite that infects and animates our otherwise lifeless bodies. She used The Stuff as a metaphor. In the ‘80s B-horror movie, railroad workers discover a tasty, yogurt-like substance growing out of the ground, which they package and sell like hotcakes. It turns out, it’s alive and mass-consumes its consumers. To add to the strangeness, she offered everyone water before she started. Sneaky!

In the modest church space, it felt somewhere between awkward youth group night, lo-fi Ted Talk and a giggling gathering of goths. But it’s more than that. At the front of the show, James told the crowd that the talks are meant to lure you into the workshops—the less peculiar part of the project—where they help people with more pragmatic issues related to death, including how to create a living will, who to call first when a loved one passes, and eco-alternatives to embalming. You know, stuff we should be planning for, but our culture’s aversion to death gets in the way.

If listening to macabre presentations softens people enough to start planning for death in a responsible way, then James says she feels like she’s succeeded.

Though Posy-Filled Pockets started in 2016, it went on hiatus that year when James found out that her father was diagnosed with Stage 4 esophageal cancer. His death, and her similar diagnosis a year earlier, made much of what she advocates become crystal clear.

Death positivity is now a national movement. One of its most prominent figures is Caitlin Doughty, a mortician who wrote a morbidly funny memoir titled Smoke Gets In Your Eyes, and founded the death acceptance organization called Order of the Good Death, which shares death-positive content online and hosts similar gatherings to Posy-Filled Pockets.

James was one of the first people to join the Order. At the time, she was the editor-in-chief of Atlas Obscura, an offbeat travel site with her own personal focus often being on death-related destinations, like an abandoned brothel in Lassen County that is rumored to be haunted.

“I’ve always been drawn to [death], and I think for most of us who are in the death industry, it’s because we experienced death in early age or had an experience that left us with a lot of questions,” James says.

In 2015, James’ surprise breast cancer diagnosis led her to move back to

Grass Valley, her hometown. She put writing on hold and got a double mastectomy while in her second trimester with her now 3-year-old son.

She’s in remission now. The experience was shocking, but James says it showed her death wasn’t an abstract concept.

“I had never thought about a [living will], or anything like that,” James says. “How can I be so involved in this topic and still not have thought about the practicalities of it for myself? It kind of got me more serious about the topic.”

Later that year, she met Lilyquist. As a kid, he imagined himself as a homicide detective, but with no real interest in law enforcement and a dead-pan sense of humor, it transmuted into death industry work, which he’s happy doing. He says he enjoys the questions folks have regarding his career choice, like what happens in the cremation process.

“Once I started working at the mortuary, I saw how widespread it was that people considered death a taboo subject,” Lilyquist explains. “Especially the topic of grief. It definitely helped expose me to a greater variety of how it’s affecting people.”

James insisted that he co-host a death-themed monthly event that was distinctly Grass Valley. The initial Posy-Filled Pockets was a success, something James wasn’t sure about at first, since the Nevada County small town is no Los Angeles or San Francisco, where similar Death Salons are sometimes held at convention centers.

Lo-fi elements are part of its charm. Many of the speakers aren’t professionals, including Courtney Williams, who’s spoken twice at Posy-Filled Pockets. Once about how “fashion kills” (about people wearing dresses dyed with arsenic, for instance) and a second time about her ex-husband’s suicide.

“People are normally uncomfortable in mortuaries,” Williams says. “You think it’s probably an awkward conversation so maybe people won’t be raising their hands and laughing about stuff. People were really engaging with the information, which was surprising to me.”

In 2019, Posy-Filled Pockets have several themed events and workshops lined up, a new website, new speakers and a podcast in the works. Lilyquist and James are resurrecting their efforts to get people talking about death.

But after watching Posy-Filled Pocket’s presentation, I realized that death-positivity isn’t just about thinking about the end; It’s about cracking jokes, finding weird stories to spin and studying all the oddball edges of this scary seemingly straight-forward topic, and having fun with something we are told is in no ways fun.

It is pretty strange that we all eventually cease to exist one day, and why not celebrate that? My dog, who’s blissfully unaware of death, will never know the joy of laughing at her mortality.