What began as ceremonies practiced by the ancient Aztecs evolved into a holiday recognized far beyond the borders of Mexico. 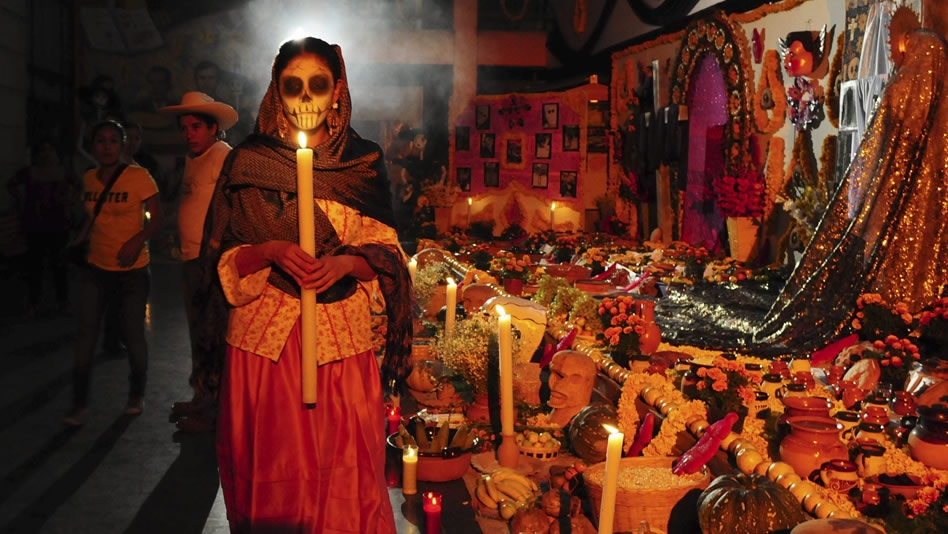 The Day of the Dead or Día de Muertos is an ever-evolving holiday that traces its  earliest roots to the Aztec people in what is now central Mexico. The Aztecs used skulls to honor the dead a millennium before the Day of the Dead celebrations emerged. Skulls, like the ones once placed on Aztec temples, remain a key symbol in a tradition that has continued for more than six centuries in the annual celebration to honor and commune with those who have passed on.

Once the Spanish conquered the Aztec empire in the 16th century, the Catholic Church moved indigenous celebrations and rituals honoring the dead throughout the year to the Catholic dates commemorating All Saints Day and All Souls Day on November 1 and 2. In what became known as Día de Muertos on November 2, the Latin American indigenous traditions and symbols to honor the dead fused with non-official Catholic practices and notions of an afterlife. The same happened on November 1 to honor children who had died.

Day of the Dead Traditions

In these ceremonies, people build altars in their homes with ofrendas, offerings to their loved ones’ souls. Candles light photos of the deceased and items left behind. Families read letters and poems and tell anecdotes and jokes about the dead. Offerings of tamales, chilis, water, tequila and pan de muerto, a specific bread for the occasion, are lined up by bright orange or yellow cempasúchil flowers, marigolds, whose strong scent helps guide the souls home.

Copal incense, used for ceremonies back in ancient times, is lit to draw in the spirits. Clay molded sugar skulls are painted and decorated with feathers, foil and icing, with the name of the deceased written across the foreheads. Altars include all four elements of life: water, the food for earth, the candle for fire, and for wind, papel picado, colorful tissue paper folk art with cut out designs to stream across the altar or the wall. Some families also include a Christian crucifix or an image of the Virgin of Guadalupe, Mexico’s patron saint in the altar.

In Mexico, families clean the graves at cemeteries, preparing for the spirit to come. On the night of November 2, they take food to the cemetery to attract the spirits and to share in a community celebration. Bands perform and people dance to please the visiting souls.

Celebrating the Dead Becomes Part of a National Culture

Honoring and communing with the dead continued throughout the turbulent 36 years that 50 governments ruled Mexico after it won its independence from Spain in 1821. When the Mexican Liberal Party led by Benito Juárez won the War of Reform in December 1860, the separation of church and state prevailed, but Día de Muertos remained a religious celebration for many in the rural heartland of Mexico. Elsewhere, the holiday became more secular and popularized as part of the national culture. Some started the holiday’s traditions as a form of political commentary. Like the funny epitaphs friends of the deceased told in their homes to honor them, some wrote calaveras literarias (skulls literature)—short poems and mock epitaphs—to mock living politicians or political criticism in the press.

“This kind of thing happens alongside the more intimate observation of the family altar,” says Claudio Lomnitz, an anthropologist at Columbia University and author of Death and the Idea of Mexico. “They are not in opposition to one another.”

The Rise of La Catrina

In Mexico’s thriving political art scene in the early 20th century, printmaker and lithographer Jose Guadalupe Posada put the image of the calaveras or skulls and skeletal figures in his art mocking politicians, and commenting on revolutionary politics, religion and death. His most well-known work, La Calavera Catrina, or Elegant Skull, is a 1910 zinc etching featuring a female skeleton. The satirical work was meant to portray a woman covering up her indigenous cultural heritage with a French dress, a fancy hat, and lots of makeup to make her skin look whiter. The title sentence of his original La Catrina leaflet, published a year before the start of the Mexican Revolution in 1911, read “Those garbanceras who today are coated with makeup will end up as deformed skulls.”

La Catrina became the public face of the festive Día de Muertos in processions and revelry. Mexican painter Diego Rivera placed a Catrina in an ostentatious full-length gown at the center his mural, completed in 1947, portraying the end of Mexico’s Revolutionary War. La Catrina’s elegant clothes of a “dandy” denote a mocking celebration, while her smile emerging through her pompous appearance reminds revelers to accept the common destiny of mortality.

Skulls of Protest, Witnesses to Blood

Over decades, celebrations honoring the dead—skulls and all—spread north into the rest of Mexico and throughout much of the United States and abroad. Schools and museums from coast to coast exhibit altars and teach children how to cut up the colorful papel picado folk art to represent the wind helping souls make their way home.

In the 1970s, the Chicano Movement tapped the holiday’s customs with public altars, art exhibits and processions to celebrate Mexican heritage and call out discrimination. In the 1980s, Day of the Dead altars were set up for victims of the AIDS epidemic, for the thousands of people who disappeared during Mexico’s drug war and for those lost in Mexico’s 1985 earthquake. In 2019, mourners set up a giant altar with ofrendas, or offerings, near a Walmart in El Paso, Texas where a gunman targeting Latinos killed 22 people.

As Lomnitz explains, one reason why more and more people may be taking part in Día de Muertos celebrations is that the holiday addresses a reality that is rarely acknowledged by modern cultures—our own mortality.

“It creates a space for communication between the living and the dead. Where else do people have that?” Lomnitz says. “These altars have become a resource and connection to that world and that’s part of their popularity and their fascination.”