Traditional Chinese funeral is an elaborate ceremony that involves a number of rites and rituals. However, the etiquette that needs to be followed during these ceremonies is worth noting.

The funeral or death ceremony is one of the most important rites of passage that virtually every human being has to go through. Funeral rites differ from country to country and from culture to culture, but all of them are unanimously aimed at ensuring that the soul of the deceased enters the afterlife without any hurdle. People have been following various funeral customs and practices from time immemorial, and we indeed have ample archaeological evidence to prove that certain patches of land served as cemeteries and that certain platforms were used particularly to carry out last rites on a person. Even today, there are a plethora of funeral rites and etiquette that cultures across the world follow, and it is indeed interesting to know that some of these are ages old, owing to the antiquity of the culture itself.

China is, without doubt, one of the oldest surviving civilizations of the world. People of today’s China value their age-old customs and traditions as much as they value advancements in technology and modernization. For the Chinese, the funeral rites are an important part, not only of their religious lives, but also social lives.

Chinese Funeral: Protocol to be Followed

Funeral rites occupy a very important place in the traditional Chinese society, and all the set rules and etiquette need to be very strictly followed. It is believed that the one who fails to adhere to the rules and etiquette of the funeral invites bad luck to his/her family. Traditionally, the Chinese people are known to host lavish funeral ceremonies for their deceased near and dear ones because elaborateness of the funeral ceremony determines the status of the family in the society. This Buzzle write-up features some of the important etiquette to be followed during a traditional Chinese funeral.

► If you are attending a Chinese funeral as a guest, make sure that you dress yourself in sober and dark colors. While you can wear pale and muted shades, black is the safest color to opt for. 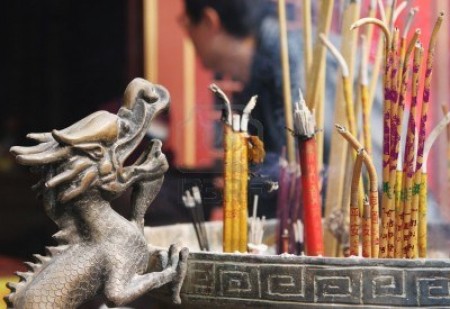 ► Avoid wearing bright and colorful clothing, as such hues may symbolize moods, contrary to the one of mourning. Do not wear red; in China, it is associated with happiness.

► You can dress up in white clothes, but make sure that they are absolutely plain, with no designs at all. In fact, the deceased is also dressed up in a white robe.

► If the deceased lived up to the age of 80 or above, guests can wear a white attire bearing shades of pink or red. The Chinese believe that if a person dies at 80 or above, he/she lived life to the fullest, and had no desires left to be fulfilled. Therefore, such a death (if it is natural), calls for a celebration, and shades symbolizing happiness are acceptable to a certain extent.

► The Chinese funeral involves a lot of rites which have to be completed properly. Traditionally, the period called “wake” precedes the actual funeral. Held either in the family home or local temple, this period lasts for several days, wherein family members and close friends are expected to bring flowers for the deceased.

► White Iris is the traditional funeral flower in China, so make sure that you take an elaborate wreath made of these flowers, if you are visiting during the “wake”. 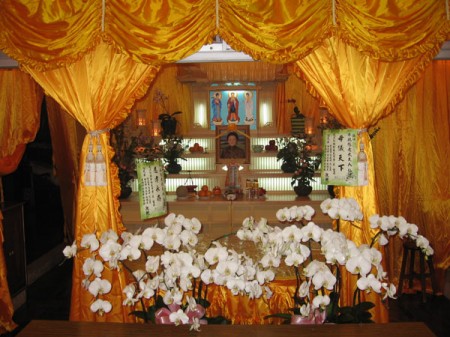 ► Though it is not customary, people generally also put banners with couplets about the deceased written on them, within the wreaths. Such a gesture shows that you are equally sad about the person’s death as his/her family.

► You can either write your name on the white envelope while you give the money or you can leave it blank; it is acceptable both ways.

► The amount that you may give varies, depending on the overall income of the family of the deceased, and also that of the guests. The amount of money also depends on the closeness of the grieving family with the guest.

► The minimum expected amount is 101 yuan (about $16), but there is no upper limit for the same. While enclosing money into the white envelope, ensure that you are donating in odd numbers.

► While the funeral is in progress, the members of the grieving family burn joss paper, also known as ghost money, to ensure safe passage of the deceased into the afterlife.

► Apart from joss paper, other miniature items such as houses, cars, televisions, utensils, etc., are also burned. It is believed that all these enter the afterlife with the deceased, so that he/she can lead a luxurious and a comfortable life, even after death.

► Once all this is done and the guests are about to leave, the family of the deceased distributes red envelopes among them. Each of these envelopes contains a coin. 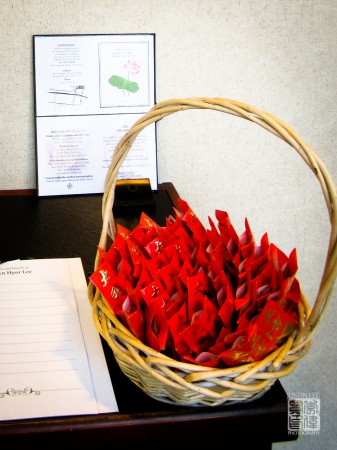 ► Red, in Chinese culture, is the color of happiness. So, the distribution of red envelopes after funeral symbolizes the end of the period of mourning, and the beginning of a new start.

► As a marker of a fresh beginning, the guests are also made to consume a piece of sweet candy before leaving for their respective homes. Sometimes, the guests may also be presented with a handkerchief.

► It should be noted that the three items mentioned above viz., the envelope with a coin, the handkerchief, and the candy, should not be carried home by the guests. If done so, these items are believed to invite bad luck.

► It is also customary for the grieving families to present their guests with a red-colored thread, while they leave for their homes. This thread is believed to ward away evil spirits, and so, it should be taken home by the guests and tied to their doorknobs.

► Once the elaborate funeral ceremony is over, a funeral procession to the final resting place of the deceased, the crematorium or the cemetery, is held.

► For this, a special band is hired and loud music is played until the place is reached. Traditional Chinese culture believes that evil spirits can be kept away by means of loud music. 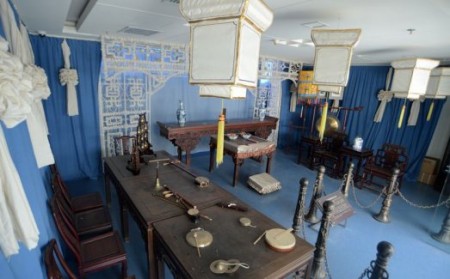 ► The other mourners are allowed to wear any shades, except the bright and bold ones, and it is also customary for them to wear a cloth band on their arms that signifies that they are mourning the death of their loved one.

► More often than not, professional mourners are also hired; however, this is not mandatory, and depends largely on the financial status of the grieving family.

► The coffin, in which the corpse is laid, is kept in a hearse decorated with funerary wreaths and flowers.

► The children of the deceased walk in the front row of the procession, carrying a large portrait of their mother/father. They are followed by other family members and guests.

► Whether the deceased is cremated or buried, depends on the personal preference of the deceased himself/herself and/or his/her family. Both these practices prevail in the traditional Chinese culture, and both are equally acceptable.

It is worth noting that in Chinese culture, the funeral customs and rites vary from person to person, depending on the social status of the deceased and/or also his/her position in the family. They also depend on the age, marital status, and the manner in which the person died. So, while you prepare yourself to attend a traditional Chinese funeral ceremony, ensure that you have considered all these things so that you can follow the appropriate etiquette once you get there.
Complete Article HERE!