(Sacramento) Today, California’s Respect After Death Act (AB 1577) was signed by Governor Brown, having passed in both the Assembly and Senate earlier this year. The long-awaited bill will provide needed guidance to help ensure that transgender people have their gender identity reflected on their death certificates. It was authored by Speaker of the Assembly Toni Atkins and co-sponsored by Equality California and Transgender Law Center. 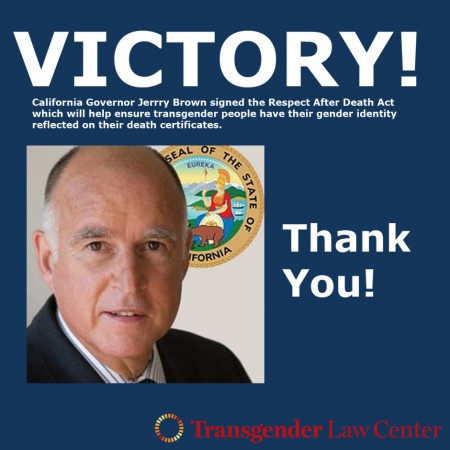 “We are grateful to the Governor, California’s Legislature, and the leadership of Assembly Speaker Atkins for enacting this common-sense bill that will help protect the dignity of our loved ones upon their passing,” said Masen Davis, Executive Director of Transgender Law Center. “This brings us a significant step closer to making sure that all transgender people are able to live—and die—authentically in accordance with who they really are.”

“Everyone deserves to have their identity respected in death, and this law cleans up a confusing process to ensure transgender Californians get the same respect that anyone else gets,” said Rick Zbur, executive director of EQCA. “We thank the Governor and Speaker Atkins for their leadership on this issue.”

AB 1577 requires the official responsible for completing a transgender person’s death certificate to do so in a manner that reflects the person’s gender identity if they are presented appropriate documentation, such as written instructions from the deceased person confirming their wishes, an updated birth certificate or driver’s license, or evidence of medical treatment for gender transition. In the absence of these documents, the gender reported by the person’s legal next of kin would be used. Drafted at the beginning of this year, the bill drew inspiration from the passing of Christopher Lee, a San Francisco artist and transgender advocate who was misgendered after his death in 2012. The bill was passed by the Assembly Health Committee in March, and passed by the Senate in August. Transgender Law Center congratulates everyone who has helped advocate for this important step!

“I’m so happy,” said Lee’s close friend Chino Scott-Chung. “It brings us great solace to know that Christopher’s legacy will live on to protect the dignity of other transgender people, and that their friends and families will hopefully not have to endure what we did.”

Transgender Law Center works to change law, policy, and attitudes so that all people can live safely, authentically, and free from discrimination regardless of their gender identity or expression. www.transgenderlawcenter.org

Equality California (EQCA) is the largest statewide lesbian, gay, bisexual, and transgender advocacy organization in California. For more than a decade, Equality California has strategically moved California from a state with extremely limited legal protections for lesbian, gay, bisexual and transgender people to a state with some of the most comprehensive human rights protections in the nation. Equality California has partnered with legislators to successfully sponsor more than 100 pieces of pro-equality legislation. EQCA continues to advance equality through legislative advocacy, electoral work, public education and community empowerment. www.eqca.org