“I see friends’ spouses die,” a husband writes, “and it scares me. Losing my wife is my biggest fear.”

My article “Is My Marriage That Different from My Grandparents Marriage?” solicited email from older, married readers willing to describe the institution as they see it. What follows is one of several responses I’d like to share. Another is here. I’d love to read more responses, especially from women, who’ve yet to send any. They can be emailed to the address at the bottom of the item.

My wife and I were born the same year during the Great Depression. We married at 19. We are still married and very much loving partners. Even though intercourse has gradually gone away, intimacy hasn’t. 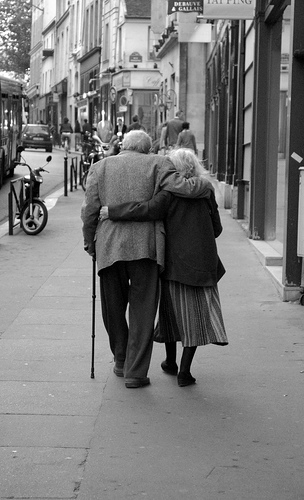 Would we have married later had attitudes toward sex been different? Perhaps. I am sure that mattered. I remember being refused condoms when I tried to buy them at the small town drug store where my college was located.

We have five children.

Like many in her generation, my wife stayed home with the kids till the last one was in school. She then completed her BA and MA degrees and had a very successful career. As an academic who came on the market during a time of educator shortage, I had the opportunity to move easily. I changed high school jobs three times before moving to complete my Ph.D. After that, we moved five times for professional reasons. The last, from abroad back to the U.S., was to follow a professional opportunity for my wife. We had moved abroad partly because she was unhappy at her job. In her late fifties, a foreign adventure also seemed attractive, and the salary was high.

We have an old fashioned division of labor. She does most of the cooking and house work. I manage the family finances and budgets. We do have a twice weekly cleaning person who does the heavy stuff. We also eat out four or five times a week. We travel three months each year, and I do all the planning and arranging for that.

What 4 Decades of Marriage Taught a Grateful Husband
How is our generation’s notion of marriage different? First, we expected to stay married. We would have never thought about it not working out. Second, we didn’t think about individual payoffs, but about being part of a unit, a family. We planned together and talked over any decision about what we did and where we went. I remember teaching a public speaking class and hearing, for the first time, a young woman speak about Betty Friedan and the need for woman to find fulfillment. I went home and asked my wife and her friend, also a young mother, if they were fulfilled. They laughed and said they were too busy to think about it. I don’t think a young woman now would say that.

I wasn’t thinking about fulfillment either. I had a career to build and a family to support. I never asked whether I was getting more personally out of our marriage than I was putting in. That too is a more contemporary thought. We were a unit, a family. Our fulfillment was joint. That continued after the kids were gone.

Prior to the pill, kids came when they did. Planning children wasn’t the way it is now. The diaphragm wasn’t a very good method of birth control. Our kids came within a dozen years. I often wonder how my wife managed to do what she did during those days. I always came home, but I was also focused on getting ahead professionally. We ate dinner as a family and did lots of things as a family. We played games. We sang as we drove places. A lot of the “Father Knows Best” things.

As an aside: as part of my academic work, I read of a focus group of inner city kids in Miami. They expected to die very young. They also used Saran Wrap as protection during intercourse. The researcher showed them old “Father Knows Best” and “Leave It To Beaver” shows. They liked what they saw because they said it would be so safe.

I can’t imagine how awful it would be, as I experience the inevitable physical changes of aging, to be doing it alone. In a short play I recently wrote, one old man says to another, “Morning stiffness doesn’t mean what it used to.” The other replies “Neither does get up and go.” We share so much history. We do little things for one another. I rub her feet; she trims my toe nails. We also share so many little jokes. It is impossible to tell anyone how often, just eating breakfast or driving to the store, we find ourselves laughing at something together. I see friends’ spouses die, and it scares me. Losing my wife is my biggest fear. I’m not sure how I would go on with out her. I don’t understand what it would be like to live alone without someone to talk to and chuckle with.

p.s. If I didn’t say in the original that I love her deeply, you might add that. Young folks need to know that love can continue and grow. I’ve written a couple of plays where the lovers are no longer kids. It’s amusing when young people, despite the evidence of their own existence, don’t think their parents know about love and sex.