How can we break the silence about what happens when we’re dying? 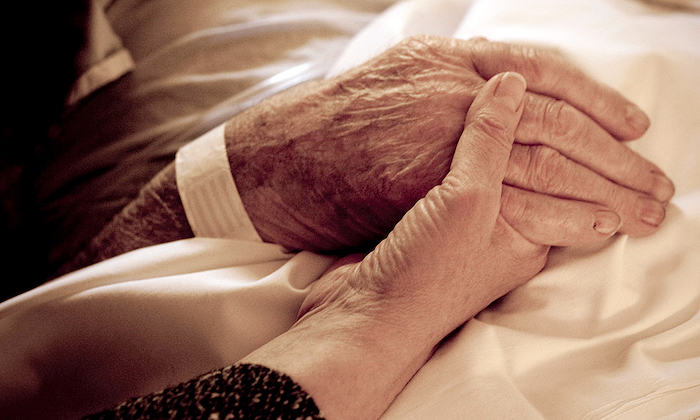 I was standing in my cubicle, a 24-year-old fact-checker envisioning a publishing career of glamor and greatness, suddenly shaking as I read the document my mother had mailed. It detailed her wish that I promise never to keep her or my father alive with artificial respirators, IV-drip nourishment, or anything else she deemed “extreme.”

I was horrified, and slightly angry. My mom was a 54-year-old literature professor who’d spent the 1970s eating whole grains and downing vitamins. She was healthier than anyone I knew. Why get so dramatic now? It seemed ghoulish, not to mention premature. But I scrawled my signature at the bottom of the page and shoved it into an envelope, my mother’s voice in my head, prodding me along.

As with the whole wheat and vitamins, my mother—back in 1990—was onto something long before it became conventional wisdom. But these days, Americans’ approach to aging and death is rapidly evolving, pushed both by the numbers and the grim reality behind them: In 40 years, 19 million Americans will be over 85, all at high risk of losing the ability to care for themselves or dwindling away because of organ failure, dementia, or chronic illness. (The days of a sudden fatal heart attack are fading; by 2008, the death rate from coronary heart disease was down 72 percent from what it was in 1950.)

So while many seniors now live vigorous lives well into their 80s, no one gets a free pass. Eating right and exercising may merely forestall an inevitable and ruinously expensive decline. By 2050, the cost of dementia care alone is projected to total more than $1 trillion.

My mom’s decision to face her end came not from any of these facts, but from the nightmare of watching her own mother’s angry decline in a New York nursing home. “You’re all a bunch of rotten apples,” Grandma growled at visitors, the words erupting from her otherwise mute lips. And there she sat for three years, waiting to die. “Why can’t you just get me some pills so I can go?” she would sometimes wail.

The slide toward death was only slightly less awful for my father’s mother. Grandma Ada would greet me with a dazed smile—though it was impossible to know whether she recognized the person standing in front of her wheelchair—before thrashing with involuntary spasms. An aide would come to restrain her, and then my dad and I would leave.

Despite our myriad technological advances, the final stages of life in America still exist as a twilight purgatory where too many people simply suffer and wait, having lost all power to have any effect on the world or their place in it. No wonder we’re loathe to confront this. The Patient Self-Determination Act, passed in 1990, guarantees us the right to take some control over our final days by creating advance directives like the one my mother made me sign, yet fewer than 50 percent of patients have done so. This amazes me.

“We have a death taboo in our country,” says Barbara Coombs Lee, whose advocacy group, Compassion & Choices, pushed Washington and Oregon to pass laws allowing doctors to prescribe life-ending medication for the terminally ill. “Americans act as if death is optional. It’s all tied into a romance with technology, against accepting ourselves as mortal.”

For proof of this, consider that among venture capitalists the cutting edge is no longer computers, but life-extending technologies. Peter Thiel, the 45-year-old who started PayPal and was an early investor in Facebook, has thrown in with a $3.5 million bet on the famed anti-aging researcher Aubrey de Grey. And Thiel is no outlier. As of 2010, about 400 companies were working to reverse human aging.

The reason for this chronic avoidance of aging and death is not simply that American culture equals youth culture. It’s that we grow up trained to believe in self-determination—which is precisely what’s lost with our current approach to the process of dying. But what if every time you saw your doctor for a checkup, you’d have to answer a few basic questions about your wishes for the end of life? What if planning for those days became customary—a discussion of personal preferences—instead of paralyzing?

Dr. Peter Saul, a physician in Australia, endeavored to test this approach by interviewing hundreds of dying patients at Newcastle Hospital in Melbourne about the way they’d like to handle their lead-up to death—and how they felt discussing it. He was startled to find that 98 percent said they loved being asked. They appreciated the chance to think out loud on the subject. They thought it should be standard practice.

“Most people don’t want to be dead, but I think most people want to have some control over how their dying process proceeds,” Saul says in his widely viewed TED lecture “Let’s Talk About Dying.”

Nevertheless, when his study was complete, Newcastle went back to business as usual, studiously ignoring the elephant in the room, acting as if these patients would eventually stand up and walk out, whistling. “The cultural issue had reasserted itself,” Saul says drily.

It’s hardly surprising that medical personnel would drive this reexamination of our final days. Coombs Lee, who spent 25 years as a nurse and physician’s assistant, considers her current advocacy work a form of atonement for the misery she visited on terminal patients in the past—forcing IV tubes into collapsed veins, cracking open ribs for heart resuscitation.

“I had one elderly patient who I resuscitated in the I.C.U., and he was livid,” she says. “He shook his fist at me, ‘Barbara, don’t you ever do that again!’ We made a deal that the next time it happened we would just keep him comfortable and let him go, and that’s what we did.”

It bears pointing out, however, that many doctors dislike discussing the ultimate question—whether patients should be allowed to choose their moment of death by legally obtaining life-ending medication. Several have told me that the debate over this overshadows more important conversations about how to give meaning to what remains of life. In Europe, the term of art is euthanasia—the practice of injecting patients with life-ending drugs—which remains illegal in the United States. But whatever the method, many physicians would prefer to avoid the entire topic.

While arguments flare around this, Dennis McCullough, a geriatrician in New Hampshire, has noticed a quieter answer taking shape among his own patients. Many are themselves retired doctors and nurses, and they have taken charge of their last days by carefully mulling the realities of aggressive medical intervention. Rather than grasping at every possible procedure to stave off the inevitable, they focus instead on accepting it. In place of scheduling never-ending doctor’s visits, they concentrate on connecting with others.

McCullough has termed their philosophy “slow medicine,” and his book about it, My Mother, Your Mother, is starting to attract attention around the world.

“If you go to a doctor to get a recommendation for having some procedure, that’s probably what’s going to happen. Doctors are driven by revenue,” he said in an interview. “But many of the things that we can do to older people don’t yield the results we’ve promised—medicine can’t fix everything. ‘Slow medicine’ is being more thoughtful about that and staying away from decisions based on fear.”

This attitude is gaining traction. In November, several hundred physicians plan to gather in Italy to discuss slow medicine (a name lifted from the similarly anti-tech slow food movement), and McCullough’s book is being translated into Korean and Japanese.

“What’s the last gift you’re going to give your family? In a sense, it’s knowing how to die,” he says. “Staying alive is not necessarily the goal.”

I consider my mother-in-law, a practicing Catholic and right-leaning political moderate, a barometer for this slowly shifting national consciousness. She is in her mid-60s and healthy, but has already written directives specifying that Bach be played at her bedside and perfume scent the air, if her health deteriorates to the point where she cannot say so herself.

Personally, I’m relieved. Unlike my 24-year-old self, I now find it comforting to plan these things, rather than living in fear of them. But I would still be mired in denial were it not for former Washington Gov. Booth Gardner, whom I wrote about in 2008 when he was pushing for a Death with Dignity law and I was a newspaper reporter.

Shaking with Parkinson’s disease, he tried to spark conversation about legalizing physician-assisted aid-in-dying while attending a luncheon in downtown Seattle with a small circle of business friends: “I have a real tough time understanding why people like us, who’ve made tough decisions all their lives—buying, selling, hiring—do not have the right to make such a fundamental decision as this,” Gardner said, referencing his wish to take life-ending medication when his illness becomes unbearable, to gather his family and die when he chooses.

The men sipped their soup. They did not approve. They did not even want to discuss it. Yet that stony opposition—which mirrors the position of the Catholic church, groups representing the disabled, and hospice workers dedicated to maintaining “studied neutrality”—has, ironically, begun to nudge talk of death into the open.

Gardner, to my mind, had articulated the central concern: Wherever you come down on end-of-life decisions, the question is one of control—and who is going to have it over our bodies at the last moments.

Thus far, only Washington and Oregon have passed Death with Dignity laws, though a voter initiative is scheduled for the November election in Massachusetts. In Montana, the courts have ruled that physicians who prescribe life-ending medication for the terminally ill are not subject to homicide statutes; in New Mexico, two doctors have filed a suit challenging prohibitions against “assisting suicide.” And in Hawaii, four doctors willing to prescribe life-ending medication have geared up for a similar fight.

Yet after 15 years of legalized aid-in-dying in Oregon, the biggest news is how seldom people actually invoke this right. Since 1997, fewer than 600 terminal patients have swallowed doctor-prescribed drugs hastening their ends, though 935 had prescriptions written. Did 335 people change their minds at the last minute? Decide in their final days to cling to life as long as possible?

If so, that might be the best thing to come out of Compassion & Choices’ campaign: a peace of mind that allows us to soldier on, knowing we can control the manner of our death, even if we never choose to exercise that power.

My own immediate family ranges in age from 3 to 84, and I envision a dinner in the not-too-distant future when we will gather, talk about how to make my parents’ final journey as meaningful as all that has come before, and raise a glass to the next stage. Maybe at Thanksgiving.