The one thing everyone shares in life is that some day it will end. Pāhiki Eco-Caskets wants to shape a final resting place that is environmentally friendly for all. 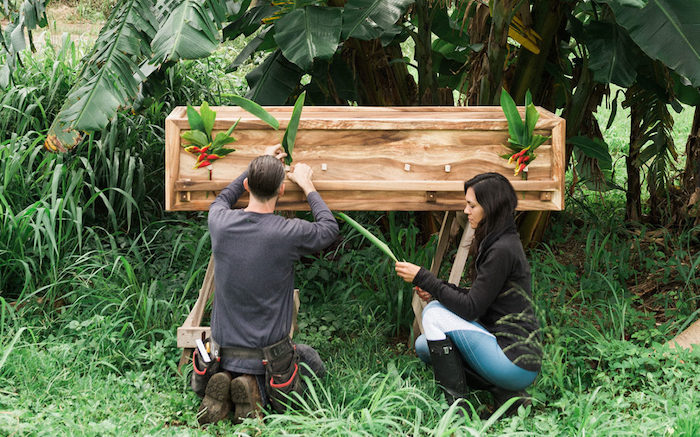 Like most people, Cortney Gusick never considered the prospect of purchasing a casket until she needed to select one for a family member. Eight years ago, her dad died from pancreatic cancer, and she was thrust into the death-care industry as a consumer. The most difficult part of making the funeral arrangements was finding the right casket. Gusick wanted something that reflected who her father was in his very full life: a Hawai‘i boy who cared about the environment and carried those values with him to Oregon, where he raised his three daughters. Ultimately, Gusick settled on a simple pine box from a small-scale, non-commercial business. “His body was going to biodegrade as it was designed to do, and it would provide some kind of nourishment for the earth,” Gusick says. She reasoned that the receptacle in which he was buried should do the same.

Common caskets are not earth-friendly. Nearly every model found in funeral home catalogs is manufactured with metal, paint, silicone, synthetic polyester fabric, and other non-biodegradable materials. That greener options aren’t readily available in the modern burial industry concerns Gusick, especially in a place like Hawaiʻi, where a reverance for one’s natural surroundings is part of daily life. After her dad’s death, she saw the metaphorical light at the end of the tunnel, and she came out the other side a casket builder. “This is what I want to offer for people,” she says. “For someone’s eco-legacy to be, ‘I did right by the earth.’” 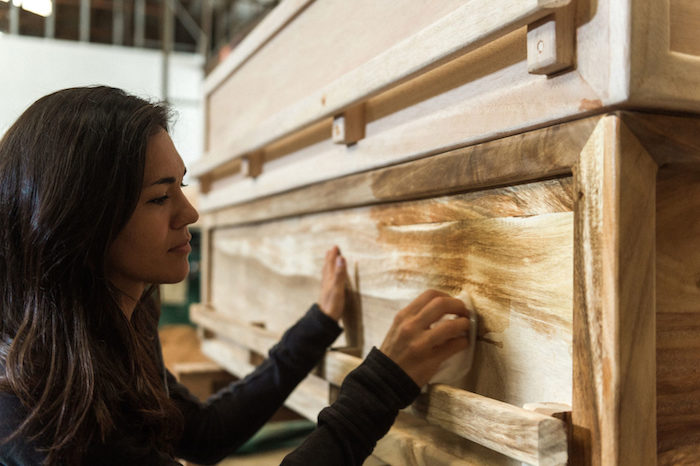 Last year, Gusick started Pāhiki Eco-Caskets, a low-impact, environmentally sound casket manufacturer, in the backyard of her Mānoa Valley home. The venture was a 180-degree pivot from her ongoing job at the Silicone Valley-based company UserTesting as a test engineer in the amorphous world of software and mobile applications. “I had zero background,” Gusick admits. But the 37-year-old felt equipped for the intensely tactile field she was about to enter. “My dad taught his girls how to do everything, how to change our own tires, acid-strip a deck, lacquer the house’s wainscotings,” she says. She binged on online tutorials to gain a baseline knowledge of woodworking. “Between Dad and YouTube,” she says, “I felt like, ‘I got this.’”

Three months later, she teamed up with Logan Baggett, a friend she met in Oregon who had previously worked in Hawaiʻi’s solar industry, to help finesse Pāhiki’s offerings of 4- to 6-foot-long, 100 percent biodegradable caskets crafted from untreated, Hawaiʻi-grown wood. Soon after, the company attracted five investors and received a business loan from the Office of Hawaiian Affairs, which they used to buy hardwoods and build out inventory.

In Hawaiian, the word pāhiki means “to pass quietly, go lightly, touch gently,” a definition the duo strives to embody. Their caskets are made with reclaimed local albizia, monkeypod, mango, avocado, and Norfolk pine provided by Waimānalo Wood, a lumber mill that also houses their workshop. Pāhiki caskets range in price from $1,800 to $2,200 (less than the $2,400 median cost of a standard metal casket). In the circumstance that someone needs a keiki casket, Pāhiki provides it for a dollar.

Gusick considers every dimension of her industry. We’re trapped in a “death-denial culture,” especially in the United States, she says, which is obsessed with indefinitely preserving the deceased in ways that only benefit the living. For Gusick, the more grandiose style of caskets, which can cost upwards of $15,000, are more for the living than the dead. Those caskets “resemble pieces of high-end furniture that belong in this world, that belong in a house, and look like they’re meant to last over time,” she says. But the reality is they go into the ground, never to be seen again. 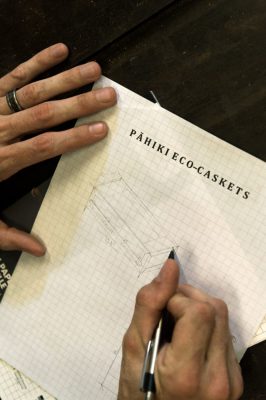 Pāhiki’s unobtrusive design aesthetic is in direct response to that. The final products—caskets that trade metal, paint, synthetic fabric, and lacquer for wood, non-toxic glue, muslin, and coconut-oil finishes—are crafted to allow the wood grain to shine in its most organic state. The caskets are stripped of sensational flourishes, but not of sentiment. Family members can opt to purchase the “collaborative option,” for which Gusick and Baggett affix biodegradable linen loops around the casket’s perimeter to hold flowers from funeral guests.

Pāhiki also has a keen interest in engaging with communities that have large Native Hawaiian populations on Oʻahu and neighbor islands. During community talk stories, Gusick presents information about Native Hawaiian burial rights and practices—which involve cremating a body in an imu, wrapping the bones in kapa cloth, and burying them in lauhala—and how to perform them legally. As a Native Hawaiian, Gusick feels especially called to apply a Hawaiian understanding of ʻāina to her work. “Hawaiians were the original environmental stewards,” she says. “I can rewind back through so many generations of people where this was always their charge, to take care of the land, and now I can do it in a way that’s modern.”

As long as humans are dying, the death-care industry, which sees profits in the billions of dollars, will remain open for business. Pāhiki’s niche market is a fractional percentage of that, but it is poised to grow as an aging population becomes more informed of greener burial methods. While Pāhiki’s prototypes are evolving, the emotional gravity of the caskets will always be the same. “Isn’t it so crazy that we’re responsible for this thing that is so intimate for a person we’ll never meet?” Gusick often thinks. “We’ll never get to look into their eyes, never get to shake and touch their hand. It’s this very special, unique thing that will only be crafted and given to them once.” It’s a heavy order, but Pāhiki hopes to treat it lightly. 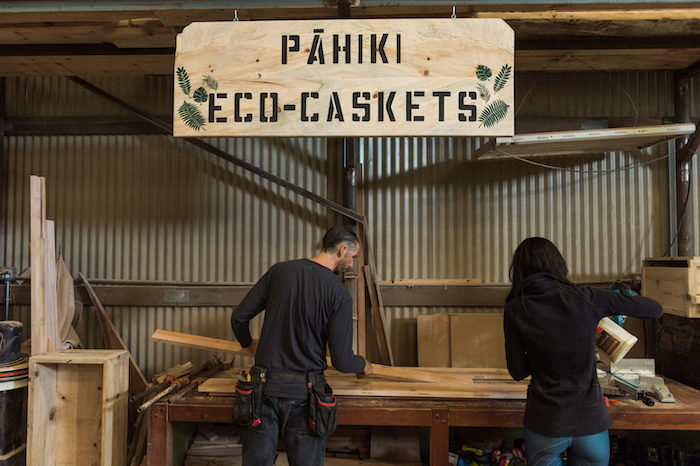 People who work in the death-care industry bring the lessons they learn in the field into their daily lives in quiet but profound ways. Here is what Gusick and Baggett have learned from the dead about how to live better every day.

Be introspective “Most people should contemplate death; it shouldn’t be an afterthought,” Baggett says. “We know it’s coming, we know it’s part of life—it’s just a transition, in my eyes.” Thinking about death and removing its negative connotations can lead to a more present and purposeful approach to life.

Be clear about your wishes “Documentation is an act of love,” Gusick says. “Put it in writing and in thoughtful detail.” The way you live isn’t always enough to let loved ones know how you want to be buried.

Be nice “There are 20 million things I don’t know about a stranger, but there is one thing I can guarantee I know about them and that they know about me,” Gusick says. That is the inevitability of death. “In society, you can quickly and easily dehumanize another person in the way you talk about them off-handedly or the way you treat them, not thinking back to that completely timeless experience you know you share with that person. If you reverse-engineer that awareness when you interact with people, you can use it to make a kinder, more insightful connection with someone. Or, you know, just try to not be a jerk.”