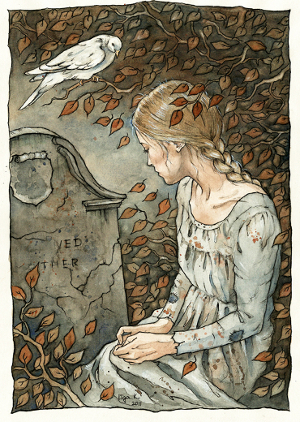 For many there are no brunches, no flowers, no cakes, no surprise gift planning with other family members in secret on Mother’s Day. Instead, there are those who silently endure the day in pain and mourning for many reasons – the death of a mother, the death of a child, the woman who cannot conceive although she desperately tries and time is not on her side, the mother whose child is missing – all members of a secret club no one wants to join.

You may not be aware of it, but I’m willing to bet someone you know – likely someone you care very deeply for – falls into one of these categories. So, if you are one of the lucky ones – you have a mom you can call to tell her you love her, or a child to hold instead of a grave to visit on Mother’s Day, I’m asking you to please take a moment to reach out to your friends and loved ones this Mother’s Day and help them remember. 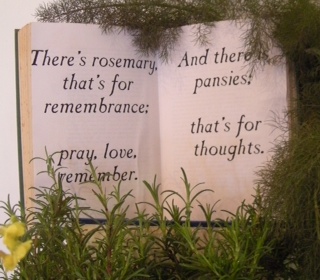 Rosemary is an herb that has long been associated with remembrance and death. Since ancient Roman times when the herb was used in burial rites for this reason, to several accounts of funerals in England where mourners traditionally tossed bouquets of rosemary on top of coffins. In this respect, rosemary is probably best associated with Shakespeare’s Hamlet, Act 4, Scene 5; “Ophelia in her madness names plants that were known for their capacity to ease pain, particularly inwardly felt pain” [1] – “There’s rosemary, that’s for remembrance; pray, love, remember.” 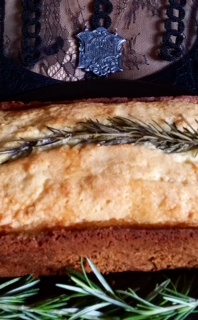 As human beings we have always honored important events and occasions with food and I want to honor your losses, your memories and your feelings of grief on this day, too. Here is a tea bread, you can take to a friend or make for yourself, incorporating rosemary with apples and lemon.

Preheat oven to 325˚F. Butter or grease a loaf pan.

Peel, core, and chop the apple and put in a saucepan with the small sprig of rosemary, the 2 teaspoons of sugar, the lemon zest and juice, and 1 tablespoon butter. Cook on low heat for approximately 10 minutes until the apple is soft. Set aside to cool, removing the rosemary sprig once the mixture has cooled.

Put the cooled apple mixture into a food processor and puree. Combine dry ingredients in a bowl. Cream together the butter, sugar and eggs. Combine the butter mixture with the dry ingredients then pour into your prepared pan and smooth the top. Sprinkle the surface with about 1-2 tablespoons of granulated or casting sugar and then lay the rosemary down along the center.

Bake the cake for 45 minutes, checking at the 35-minute mark to see how it’s going. When your cake tester comes out clean, remove from oven and cool. I refrigerated mine once it was cooled, although if you can’t wait, I’m sure it’s good warm as well!

Everyone should ask themselves, “How do I want to die?” 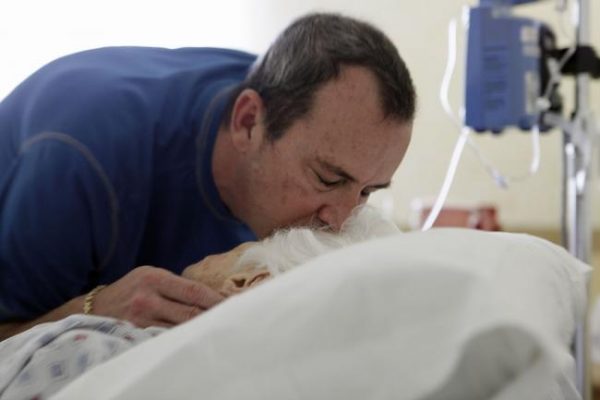 As doctors, we are trained to solve problems.

If an arm is broken, we set it. If a heart valve is leaking, we replace it. If infection strikes, we do our best to cure it. There is real satisfaction when, as physicians, we make an accurate diagnosis and deploy an effective treatment.

Perhaps that’s why, when there is no problem to be solved, we don’t always do our best work. Death, after all, is not a solvable problem. All our patients will die. We can’t fix that. And too often, as a result, we don’t do all we should, or could to help our patients accept the inevitable.

Physicians are not alone, of course. Our society generally does a poor job of seeing death as a natural outcome of life. Many of us maintain the myth of our own invincibility long past our 20s. And where death was once something that typically happened at home in the presence of family and friends, it more often happens today in a hospital or nursing home.

When confronted with the question, “How do you want to die?” many of us might answer “I don’t.” But this question, the kind of death we want for ourselves, lives with us every day of our lives. It is true that extending life is a desirable and legitimate goal of our healthcare system, but the quality of our lives — and of our deaths — have a place as well.

None of us can solve death as if it’s a problem, but we can all have goals for the end of our lives. And it is that change, from problem-solving to goal-setting, which can lead us as physicians to do better by our patients when it comes to end-of-life care.

Of course, better end-of life-care, like better health overall, is not just the doctor’s responsibility. Just as everyone needs to do their part in the work of extending and improving life by not smoking, exercising and eating a healthy diet, so, too, must our patients take an active and informed role in good end-of-life planning.

The rewards can be a bit counter-intuitive. Research shows that among those who are given a terminal diagnosis, having an end-of-life plan that includes goal-directed care like hospice leads to care that is not only less costly, but patients on average are happier and actually live longer than those who exhaust every treatment option.

The good news is members of the medical community are beginning to embrace these changes. Across the MaineHealth system, for instance, events were planned around National Healthcare Decisions Day on April 16, organized to raise awareness of better end-of-life planning. And every day the conversation is growing among doctors, nurses and other practitioners about the need to talk to our patients about the benefits of creating advanced directives for healthcare and thoughtful end-of-life options such as hospice care.

For all this good work, though, the most important lessons I learned about death and dying didn’t come as part of my medical training. They came from my parents.

During my internship year, my dad as a relatively young man in his late 50s, had to struggle with the decision of whether to undergo chemotherapy for advanced lung cancer. He decided that his goal was not to pursue more days alive, but rather, to live the rest of his life meaningfully.

He chose to forgo chemotherapy and identified the goals he wanted to meet before dying. He completed the design of a church he was working on. He deliberately and intimately connected with family and friends. He put his financial affairs in order. He even planned his entire visitation service and funeral, including designing the memorial card handed out at his wake.

Importantly, he didn’t do this alone. He had to talk with a lot of people. Everyone important to him knew the plan. His family, his doctor, his business associates and his close friends all understood what to expect. And we all knew that my dad was living the way he always had, in a thoughtful and loving manner.

And, he spent time conversing with his God. “I don’t have a problem with dying,” he would say. “I’m just not sure I agree with the timing.”

My father was able to have the kind of death he wanted because he thought about it beforehand and took steps to insure that he died the way he had always lived.

Years later, my mother died from Parkinson’s disease. I am grateful to this day for the afternoon she spent with me not long after her diagnosis putting her thoughts down into a medical directive that would guide my family through the end stages of that illness. It was a natural and rewarding conversation in part because we didn’t set out to produce a perfect document, just one that would work for my mom and our family.

As a doctor, I have seen the alternatives to these thoughtful deaths.

I remember the first time I responded to a code in the hospital. I was a young medical student. A “code” or “code blue” is called over the intercom system of a hospital when a patient has had an unexpected cardiac arrest.

Amongst all the commotion, the thing that stood out the most to me was the patient. She was very frail, very old — and lifeless. The whole scene struck me as too much. It felt invasive and out of place.

Despite the apparent futility of the efforts, the “code” continued for what seemed to be a very long time. As is the case with the vast majority of “code blues,” the effort was not successful.

There is a reason why 65 percent of older physicians have an advanced directive, compared to 20 percent of the population generally. We know the limits of modern medicine. As a result, we know how we would like to die.

As physicians we must resolve to build end-of-life conversations into the care of all our patients. The time to start the conversation is long before a terminal diagnosis. And as with smoking cessation, progress will depend not on one conversation but instead on an ongoing dialogue.

If you are a patient and your doctor hasn’t brought up end-of-life care, don’t be shy. Ask. The time to start is now, and it is a conversation that should include not only your doctor, but all those close to you.

As an integral and inevitable part of life, death is not a problem. But our failure to plan for it is. Let’s solve it, together.

Software developer Pieter Hintjens outlines his rules for talking to someone who is dying, as he faces up to his own diagnosis of terminal cancer 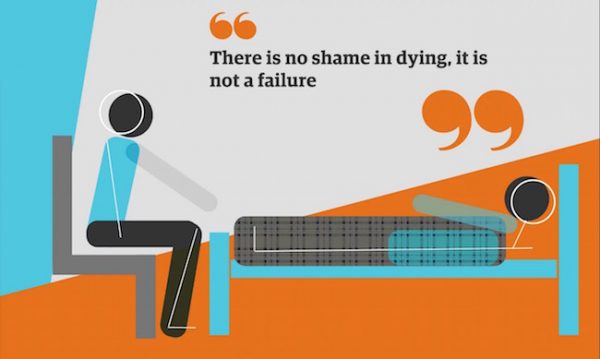 Software developer Pieter Hintjens has been diagnosed with terminal cancer at the age of 53. He will be opting to end his own suffering through euthanasia, which has been legal in Belgium since 2002. He has three children, aged twelve, nine and five. In a final article on his website, he has outlined a protocol for dying, including these thoughts on how to have a conversation with someone you know is going to die.

Above all, do not call and then cry on the phone. If you feel weepy, cut the phone, wait ten minutes, then call back. Tears are fine, yet for Bob, the threat of self-pity looms darker than anything. I’ve learned to master my emotions yet most Bobs will be vulnerable.

Above all, express no emotions except happiness, and don’t give Bob new things to deal with.

It’s not all Alice’s work. Bob too has obligations under this protocol. They are, at least:

There is no shame in dying, it is not a failure.