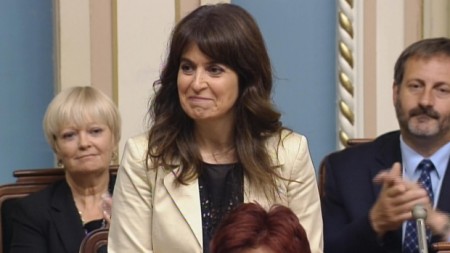 Terminally ill patients in Quebec now have the right to choose to die.

The non-partisan Bill 52, also known as an act respecting end-of-life care, passed Thursday afternoon in a free vote at the National Assembly in Quebec City.

‘Dying with dignity means dying with the least amount of suffering,’— Véronique Hivon, PQ member of the National Assembly

The bill passed 94-22. There were no abstentions.

“Sometimes when you are suffering in pain, one hour can feel like one week.… The protection of the vulnerable is reflected in every aspect of this bill,” said Parti Québécois member of the National Assembly Véronique Hivon, who drafted the bill when she was minister of social services under the former PQ government.

Bill 52 allows for and outlines under which conditions terminally ill Quebecers can request to receive medical aid in dying. 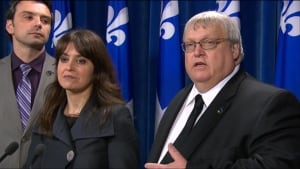 Health Minister Gaétan Barrette, right, stood with members of the National Assembly from the three other parties (including Véronique Hivon, who drafted the bill) in late May to affirm the cross-partisan support for Bill 52. (CBC)

The main indicator for requesting medical aid in dying is “an incurable disease, an incurable illness, which is causing unbearable suffering.”

“For me, dying with dignity means dying with the least amount of suffering … and respecting who that person always was during his or her whole life,” Hivon said in the National Assembly before the vote took place.

Her speech was followed by applause and a standing ovation.

Liberal Christine St-Pierre was one of the 22 who voted against Bill 52.

“I don’t believe it’s right to give [anyone] the power to kill somebody,” St-Pierre said.

This legislation is the first of its kind in Canada. Its passage comes at a time when the right to die is being heavily debated in the rest of the country.

The Parti Québécois tabled the bill nearly a year ago after years of work from both the PQ and the Liberal government that came before it.

A committee on dying with dignity was assembled during Jean Charest’stenure as Quebec premier to study the issue and produce a report.

Its massive report, filed in March 2012, provided the foundation for Bill 52.​

However, Liberal Leader Philippe Couillard refused to play ball with the PQ when the party tried to force the bill into passage right before calling an election. Bill 52 died on the order paper as a result.

During the 2014 Quebec election campaign, Couillard promised to reintroduce the bill as it was drafted at the earliest possible moment during the new parliamentary session.

He also got the support from all four parties to reintroduce the bill at the stage it had died, instead of starting from square one.

It was reintroduced in late May by the new Liberal government.

Liberal Health Minister Gaétan Barrette made that announcementwhile standing side by side with MNAs from the three other parties.

“Between the four of us, we think the bill will pass strongly,” Barrette said at the time.

Ashes to ashes, dust to … diamonds? Here are 10 ways to give cremains a life after death.

Time for some symbolism! Hourglass iconography on gravestones dates back to the Puritans. Now Lifetime Hourglass Urns can accommodate the ashes of one or two loved ones.

Your cremated loved ones can’t turn over in their graves, but they can spin right round on a record player. The British service And Vinyly presses ashes into vinyl so the dearly departed can rest in peace at 33 rpm. Families can provide the audio or have the service compose an original song, known as “bespook music.”

Human life is finite, but diamonds are forever. The memorial jewelry company LifeGem uses carbon from cremains to create diamonds of assorted cuts, colors, clarity, and carats. The gems can be used to make various pieces of jewelry, but we’re thinking an engagement ring might be a little creepy.

To paraphrase Yogi, this is more morbid than the average bear. The company Huggable Urns stores cremains inside the plush and cuddly body of a stuffed animal.

Commemorative tattoos don’t just honor deceased loved ones. Some are made with them! Tattoo artists can sterilize cremains and then mix them with tattoo ink, so the dearly departed is always under your skin.

6. Something to Write With

Ink isn’t for everyone. The Carbon Copies project by designer Nadine Jarvis turns cremains into a set of 240 pencils. Each is stamped with the departed’s name and birth and death years. Pencils are accessed one at a time and sharpened into a wooden box. After each pencil is used, the box of shavings can be kept as an urn.

Now a painting of your late grandmother can really be of your grandmother. A number of artists mix cremains and paint to create a special memorial portrait, landscape, or still life.

Here’s a new twist on the tree of life. An art venture called Biopresence claims to transcode human DNA into trees to create a leafy, living memorial that isn’t technically genetically modified. Consult their helpful chart above if you have any questions. We’re guessing it’s not like Grandmother Willow in Pocahontas.

Go out with a bang! Companies like Heavenly Stars Fireworks transform ash scattering into a pyrotechnic extravaganza. Writer Hunter S. Thompson was memorialized this way in 2005. If ammo better suits the departed, a company called Holy Smoke turns cremains into shotgun shells.